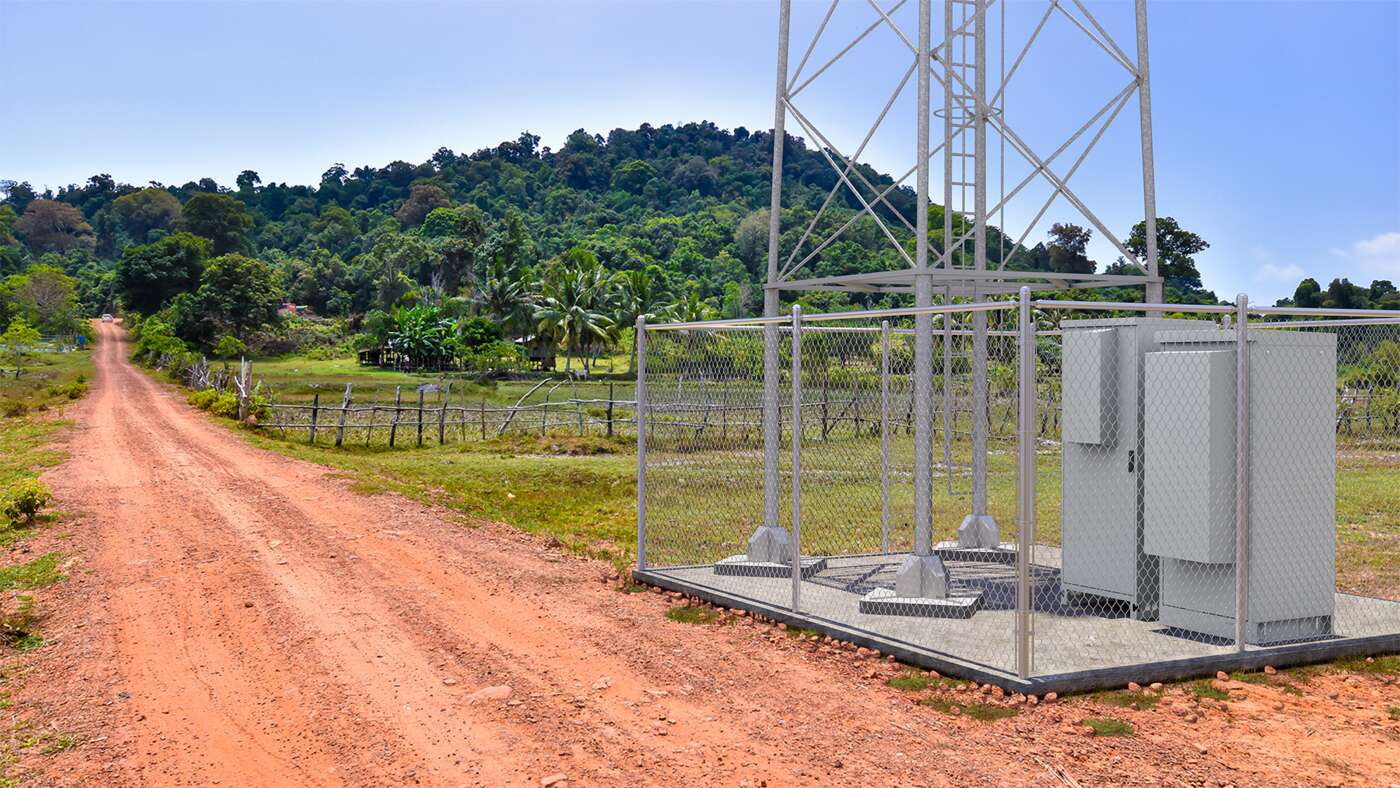 Millions Still Don’t Have Access to Broadband Internet in 2020

How is it possible in 2020 that so many people in North America still lack access to a high-speed internet connection? Despite advancements in communications technology, the cost to connect the hardest-to-reach people on the continent has largely not justified the investment. As a result, both the Canadian and United States governments have pledged billions of dollars for up to 10 years to help operators of broadband networks offset costs needed to bridge the digital divide. And while the deadlines to apply for some funds have already passed, more money is available in 2021. Read on to learn what these programs are and how inCode can help companies with the funding process and deployment strategies.

Data from an update published in March of this year by the Microsoft Airband Initiative, show that more than 157 million Americans still do not use the internet at broadband speeds. This number contrasts starkly with the FCC’s own figure of only 21.3 million not covered published in February 2020. A known flaw with FCC Form 477 reporting which counts all households as “covered” even if only one is served is responsible for the discrepancy. In the United States, the minimal broadband performance speed is only 25 megabits per second (Mbps)download and 3 Mbps upload. 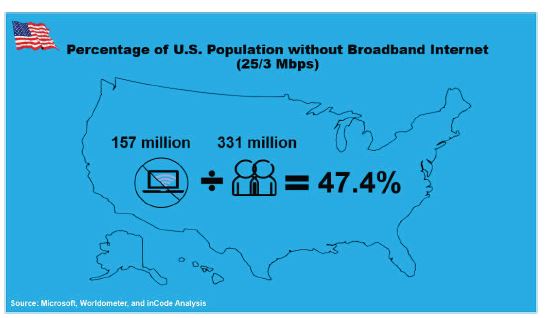 While increasing steadily to almost 7 million since 2000, the Canadian rural population as a percentage of the total population has been in decline for decades as urban growth soars. Because of the sheer vastness of the territory, connecting people in rural and remote areas is very challenging. Six in 10rural households (63%) still do not have reliable access to high speed internet. 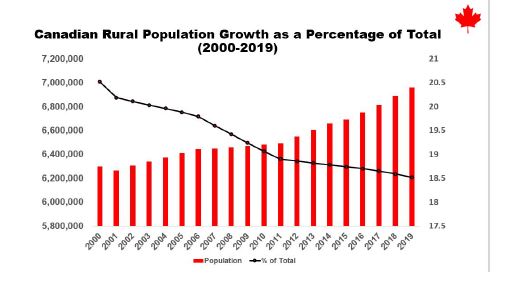 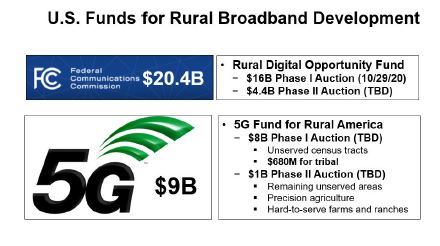 Formerly called the Connect America Fund, the $20.4B Rural Digital Opportunity Fund (RDOF) will hold its Phase I auction on October 29th and target up to $16 billion in assistance for census areas in states entirely without voice or broadband service. Phase II will award the remaining $4.4 billion to census blocks not addressed in Phase I and to partially underserved areas.

The FCC has pledged to support RDOF subsidies for 10 years commencing in 2021 to encourage long-term investments and auction participation. Funds can be used for initial network deployment, ongoing operational and maintenance costs, and ongoing delivery of services.

As a result of a Notice of Proposed Rulemaking (NPRM) ruling on April 23,2020 another $9 billion has been set aside to support a new 5G Fund for Rural America focused on deploying wireless broadband and voice services in rural and other hard-to-serve areas. The 5G Fund excludes areas covered by the merger between T-Mobile and Sprint.

As with RDOF, the FCC plans to award5G fund support through a “reverse” auction in two phases, where the provider offering to serve an area with the fastest speeds for the least amount of money will be the winner.

Support recipients will be required to provide a minimum cell-edge download speed of 7/1 Mbps, with a 90%coverage probability and 50% cell loading factor. The FCC will also cap supported service latency at 100milliseconds per round trip.

Finally, at least one service plan with a data allowance equaling the average U.S. subscriber’s data usage must be offered at rates “reasonably comparable” to those offered in urban areas and be subject to collocation and roaming obligations. 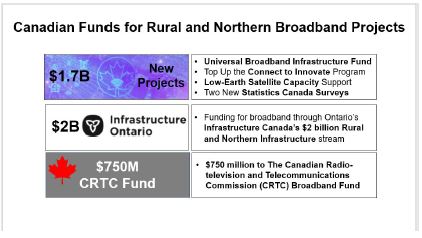 The Canadian government is committed to providing universal high-speed 50/10 Mbps internet and has pledged billions of dollars to partners who can deliver broadband connectivity to 90% of Canadians by2021, 95% by 2026, and to the hardest-to-reach Canadians by 2030.

A $1.7B Universal Broadband Infrastructure Fund was created to support new projects for up to 10 years like low-Earth orbit satellite capacity, continued support for the successful Connect to Innovate program, and two new Statistics Canada surveys to measure broadband usage.

Up to $750 million in support over the next five years is available from The Canadian Radio-television and Telecommunications Commission(CRTC). Projects to build or upgrade access and transport infrastructure to provide fixed and mobile wireless broadband internet services in eligible underserved areas will be considered.

Five projects have recently been selected to receive the first round of CRTC Broadband Funds, and the second call for applications is now closed. However, more funds from the Universal Broadband Fund are still available to support projects through2025.

Other Loans and Private Investment

The Canada Infrastructure Bank will support up to $1 billion in federally backed loans and provide at least $2billion in private investment to make the impact of publicly funded projects and loans go further.

Some operators in both the United States and Canada are now required to submit internet maps in a geocoded format containing coverage shapes, or polygons, which show geospatially where residential broadband services are available as part of their applications for funds as well as ongoing access to lines of credit. In the U.S. only wireline broadband providers are held to this standard because reporting requirements to apply to bid in upcoming auctions for the 5G Fund for Rural America are still being debated. 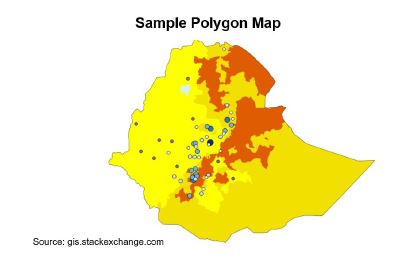 In Canada, only Last Mile broadband coverage must be reported with these accompanying maps. However, Canadian operators must also provide detailed information about where tower locations, antennas, and other technologies are found as part of their applications.

inCode Can Assist with Network Planning and Bid Strategy

inCode Consulting has experience assisting operators with every facet of the network planning and broadband auction process -from coverage mapping and FWA site planning to war room strategy. We can create updated coverage maps for submission with operator applications including the locations of nearest network assets (i.e. mobile towers, Wi-Fi hotspots, cable and fiber lines), identify access to backhaul, and overlay geographic constraints like topography and extreme weather which may interfere with signal propagation. Our consultants will assess and provide details around the financial viability of the census tract in question and advise on bidder pricing strategy. 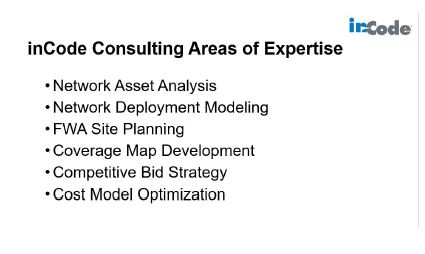 Ultimately, the applicant who submits the lowest price with the most robust broadband service wins, but fund recipients will be required to provide coverage at committed performance levels to 100% of households in the census tract within a defined period of time, then monitor and provide regular performance reports in order to continue to draw on letters of credit. Therefore, it’s important that interested applicants not well-versed in these areas choose an experienced partner, like inCode, to assist them.